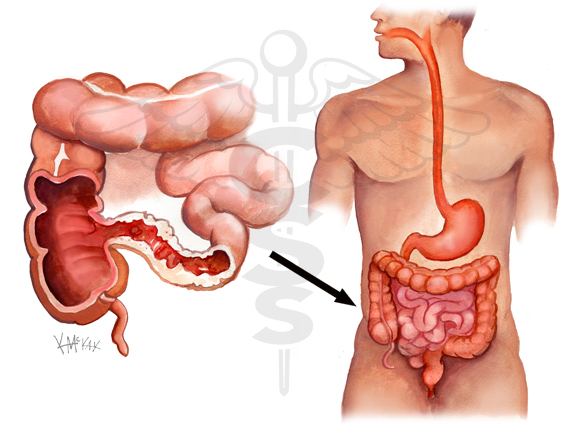 There is no cure for Crohn’s, but there are certain medications that can make life considerably better for those who suffer from the disease’s painful symptoms. Some are specifically geared at stopping flare-ups, while others work to prevent them from happening at all. Still others are designed to treat the emotional affects of living with a chronic disease.

First and foremost, Crohn’s is a disease that causes inflammation of the intestines. It then makes sense that the first line of defense against it should be an anti-inflammatory. However, there are particular drugs that have a greater impact on Crohn’s than others.

Aminosalicylates (5-ASA), olsalazine, and mesalamine are used to treat mild cases of inflammation. The name brands of these medications in the oral form are:

Since a large amount of swelling is found in the colon, however, suppositories provide a slightly better form of relief. Look for Canasa® and Rowasa® when seeking out the more direct aid.

Many of these medications also act as an immunosuppressent since many of these include sulfasalazine in the ingredients list, and more than 80% of patients find them to relieve their symptoms.

Side affects – which are mild if the medication is ramped up in small doses – include:

All of these fade with the cessation of use of the drug. The greater concern for physicians is the fact that nearly 30% of IBD patients are found to be allergic to the sulfa in these treatments.

When flare-ups are extreme, or when the patient isn’t able to use the more common anti-inflammatories, the immunosuppressing family of medications known as corticosteroids may be considered. Prednisone is the most commonly prescribed corticosteroid on the market.

These medications are only considered when the inflammation is severe because the side-affects can be worse than the initial symptoms. Some of the most dangerous side-affects for continued use of a corticosteroid include:

However affective these medications may be, they should only be considered for use during especially painful and severe flare-ups. Osteoporosis is already a concern for Crohn’s patients, as is a reduced resistance to infection. Using a medication that increases those risks further is done only with careful consideration, and only for a short time to arrest the flare-up before moving on to other medications.

Because of the problems inherent in corticosteroids, doctors have started turning to another family of medications known as immune modifiers, or immunomodulators.
These are used in place of steroid treatment whenever possible so long as it has a positive affect on the patient. These medications include:

The theory that Crohn’s is caused by an over-active immune system is buoyed by the fact that these medications are a very effective form of maintaining remissions. Once the initial flare-up is arrested by the use of steroids, immunomodulators are ramped up as the steroids are decreased, keeping the immune system out of commission.

As far as side effects go, there are very few. Loss of appetite and nausea being the most taxing, and those usually go away once the body gets used to the medications. Nevertheless, given that these medications are intended to shut down or slow the immune system, it leaves the patient exposed to a greater chance of infection.

When all else fails, a much more invasive type of medication may be required. Biologic therapies are relatively new, having only been approved by the FDA since 1998. Using a chimeric monoclonal antibody created out of 75% human proteins and 25% mouse proteins, this biologic therapy completely knocks out the immune system of the patient by blocking the immune system’s overproduction of a protein called TNF-alpha, the protein that causes inflammation.

Called infliximab and selling under the brand name of Remicade®, this wonder drug has few side affects and does an incredible job of relieving the symptoms of IBD. Even more importantly, it helps lessen the risk of surgery by reducing the chance that fistulas will drain into the body cavity.

As with all wonder drugs, however, there is a catch. Infliximab is administered via IV, and the beginning stages of the treatment require three separate admissions lasting two hours each over the course of four weeks. After that, however, the medicine maintains a remission with only one treatment required every eight weeks.

Because of the increased risk of infection many of the medications used cause during a flare-up, it’s not unusual for a physician to add a preventative antibiotic to the daily routine. Additionally, concern for an infection in the intestines while trying to protect them from a flare-up can be very high.

Due to the stress involved in tackling painful, chronic diseases like IBD and Crohn’s, doctors routinely suggest that their patients consider taking anti-depressants along with their other medications. This isn’t usually to suggest that the patient is distraught or in anyway insane, but rather as a way to help maintain a positive outlook at the upcoming problems they may face.

As most people know, a positive attitude can mean the difference between surviving a disease and living with one.